I did my test drive and order of the MG5 nearly 4 weeks ago (time flies). At the time I went for the Westminster Silver as my current car was red and the blue and black didn't really take my fancy. On order I was told it would be late March - mid April before it arrived but was happy enough to wait. Today however the dealer got back to me to see if I wanted to take the demo vehicle in Red with a 3000 discount. There wont be that many miles on it as I was the first to actually drive the thing. So red or not the wallet overcame my colour preferences and now they hope to have it ready for me next week.

Staff member
Result. Any chance you could post your experience of taking delivery (with photos)?
Also would you be interested in talking about it in a Live Streamed Zoom call?
P

Certainly do my best Stuart. I am due to get it next week (I was assuming Friday) however as you may have heard Northern Ireland retail is to shut for two weeks starting next Friday. I am about to email SERE MG to see if this is going affect me picking it up or if I can pick it up before the close down. Will let you know.
P

Well I actually picked up the MG5 yesterday evening. The pickup of the car was very smooth and nothing out of the ordinary from picking up an ice vehicle. A few documents to sign, obligatory photograph for the dealership and a quick run down of the vehicle. Bearing in mind that I am a complete newbie to the EV scene I will make this complaint, whilst the dealership were excellent in all my dealings with them I think they are missing out on actually explaining the basics such as different chargers, what you need to charge and how to charge. A lot of this of course you might say should be researched before you buy, but of course if you watch the EV ads on TV it only involves getting in and driving to your hearts content, so, I would expect that there are a lot of people who are unaware of some of the peculiarities involved with EV driving.

With noting the above, I made a couple of very rookie errors yesterday. I picked up the car and drove off happy to be showing family and friends my new toy. The first mistake I made was not checking that dealership had not charged it to full...it was only around 70%. Not to worry i thought I'll drive around and then go to charge her up again to get used to doing it, rookie error 2. I suddenly realised I had only been provided with a 3 pin charger and of course I have no way to charge from my house. Promptly ordered myself a cable which will come Friday/Saturday. Wasn't too concerned however as there is a Rapid charger near my home so a quick 40 minutes will get me up to a decent level again and so off i went to commit rookie error number 3. Got to the charger and found out there was only one tethered cable which was of course useless to me as it was a Chademo type. Still I had enough miles to get me into work and there was another Rapid Charger fully working (With the right type of charger) nearby so i could charge down there before work while grabbing a coffee. Rookie error 4 because despite showing working the charger was totally refusing to take the RFID card. Thankfully I was able to borrow the boss's charger but in the long-term I think with the shortage of Rapid chargers over here in Northern Ireland, I am going to have to plan my charging a little bit better.

On to the car itself. I will try and go over some of the issues I have noticed on the forum but bear in mind I haven't really had a good chance to play around with all the bits and pieces. The car is as I said during the test drive very comfortable to drive. It certainly appears to handle well and although i have generally been driving in Eco mode, Kers 3 I have found it faultless in its performance, in Sport mode it can definitely take of at a speed that lick whilst not being overpower for most normal drivers.

There have been complaints about the touch screen but I have so far found no issues and it is certainly a lot better than the one that was in my Mazda CX5 and much more responsive and user friendly. Apple CarPlay connected flawlessly on a non apple cable.

One issue I did not was that the car really did mist up very quickly due to the weather and this on the rear side windows meant that a quick glance to the side made you think that there was something coming up the side of you. On the plus side the steaming up cleared very very rapidly with the air on.

On the mileage side bearing in mind the cold and rain I would say that it was giving close to the range claimed but i will find out better in the coming weeks.

Charging. When i finally did get a chance to charge it on the boss's Podpoint and a brief stop on the motorway, it charged first time and with doors locked and unlocked.

I have attached a few photos and will update as i find out a few quicks in the weeks ahead. 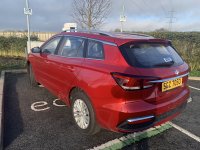 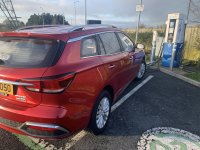 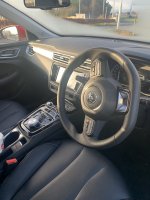 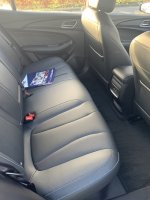 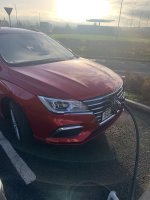 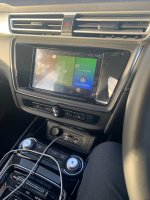 Staff member
Thanks for sharing. Any chance you could join us on the podcast on Monday at 7:30pm to talk about it?

[Edit: The Zoom call took place on Monday 23rd November 2020.] Please click the like button and subscribe. If you have suggestions for discussion points in further podcasts, please include them in a reply below. We hope you will join us each Monday at 7:30pm UTC (and don't worry if you are...

Stuart Wright said:
Thanks for sharing. Any chance you could join us on the podcast on Monday at 7:30pm to talk about it?

[Edit: The Zoom call took place on Monday 23rd November 2020.] Please click the like button and subscribe. If you have suggestions for discussion points in further podcasts, please include them in a reply below. We hope you will join us each Monday at 7:30pm UTC (and don't worry if you are...

Yes that should be grand Stuart...see you Monday
P

Not sure to be honest but certainly different from the Roewei that i have seen online.
P