My car had to be put on a truck today and taken to the dealer for repair.

I tried to charge on a Rapid Charger, which failed. The car then decided it would not start..... 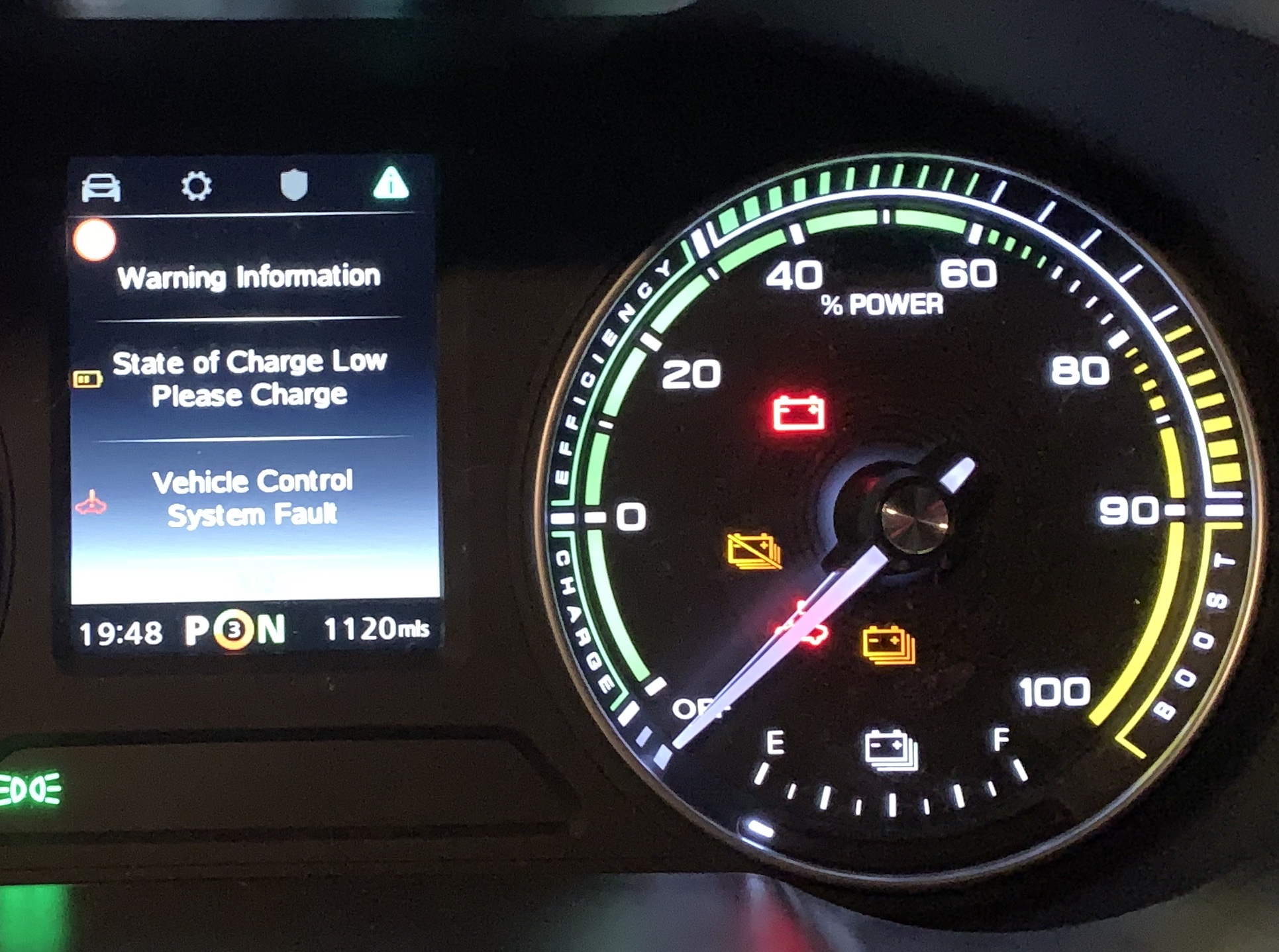 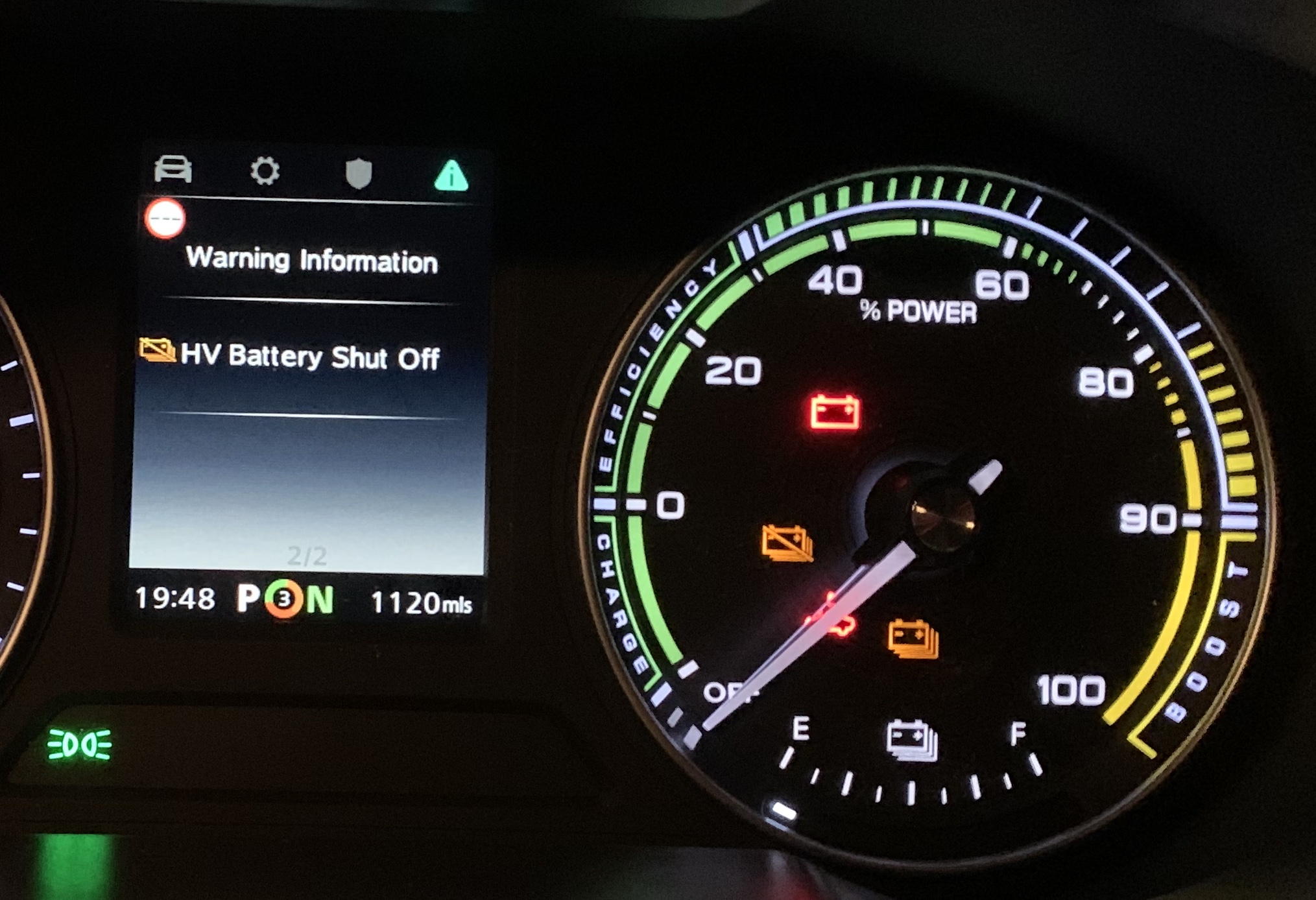 we already had a similar problem, close all windows and restart ... (what does that remind me now) ... So lock it from the outside, wait a bit and zack, the main contactor switches.

proudZSowner said:
we already had a similar problem, close all windows and restart ... (what does that remind me now) ... So lock it from the outside, wait a bit and zack, the main contactor switches.
Click to expand...

Was that also when you were starting rapid charging?
(@Dave I edited the thread title to better describe the situation. This may attract more people to comment if they google those key words).
D

We tried all sorts to try and recover the situation, but no joy.

It is the second time it has happened to us. The first time we left the car alone for 10 mins and it righted itself. This time, nothing would get it to recover.

On both occasions I was attempting a charge using an Ecotricity charger - both failed.

I had tried about an hour earlier to charge on a Polar charger, this also failed, but did not cause an issue with the car.

Maybe it is something Ecotricity is doing with the communication? Even so, it should not brick the car?
D

It has been mentioned on “another forum” that maybe the 12V battery is the issue.

As I mention, I had tried about an hour earlier to charge at a Polar charger immediately after driving there. This failed, but didn’t affect the car.

For the attempt at the the Ecotricity charger, the charger was occupied when I arrived. I had to wait for 45 mins for the charge to complete on the other car. During this time I spend a period in the car with the lights on and the radio on. It is possible that the 12V was drained a bit during this time?
P

Stuart Wright said:
Was that also when you were starting rapid charging?
(@Dave I edited the thread title to better describe the situation. This may attract more people to comment if they google those key words).
Click to expand...

With regard to the 12v battery, I sat in my Ioniq for under an hour with the ignition off but sound system on and that drained the 12v battery so much that I had to call the RAC.
Ignition on charges the 12 volt from the main battery, so keeping the ignition on is important. Maybe it's the same in the ZS EV and you have drained the battery somewhat?
P

Dave said:
My car had to be put on a truck today and taken to the dealer for repair.

I tried to charge on a Rapid Charger, which failed. The car then decided it would not start.....

The images show the 12v battery to be nearly "empty" which might be a clue. I'd be tempted to put a little juice from a friendly motorist into the 12v battery via the terminals using jump leads which I now intend to carry in the car!
D

avhation said:
The images show the 12v battery to be nearly "empty" which might be a clue. I'd be tempted to put a little juice from a friendly motorist into the 12v battery via the terminals using jump leads which I now intend to carry in the car!
Click to expand...

My mistake for which I apologise. Due to get my car in 9 days and counting!
D

You will enjoy your MG. They are fantastic EVs. Those 9 days won’t take long to go by.

The issue I have with mine is no worse than the problems I had with the much more expensive I-Pace. Don’t let it worry you too much. EVs are new to the world and will take a while to settle down.

Carrying a battery booster is always a good idea ?
I

I've just had a similar issue with my MG ZS EV earlier today, or yesterday actually as it's past midnight...
In my case though, I started the car as usual to go shopping (ac off / heating off / radio on after starting the car).
Reversed onto the street from my parking space, switched to driving mode and started driving for about 300m up to the end of my small street that leads to another small street that connects other 2 bigger roads.
I was driving with no more than 20 mph when the car stopped suddenly right when I was getting to the end of the street and signalled the 2 error messages : 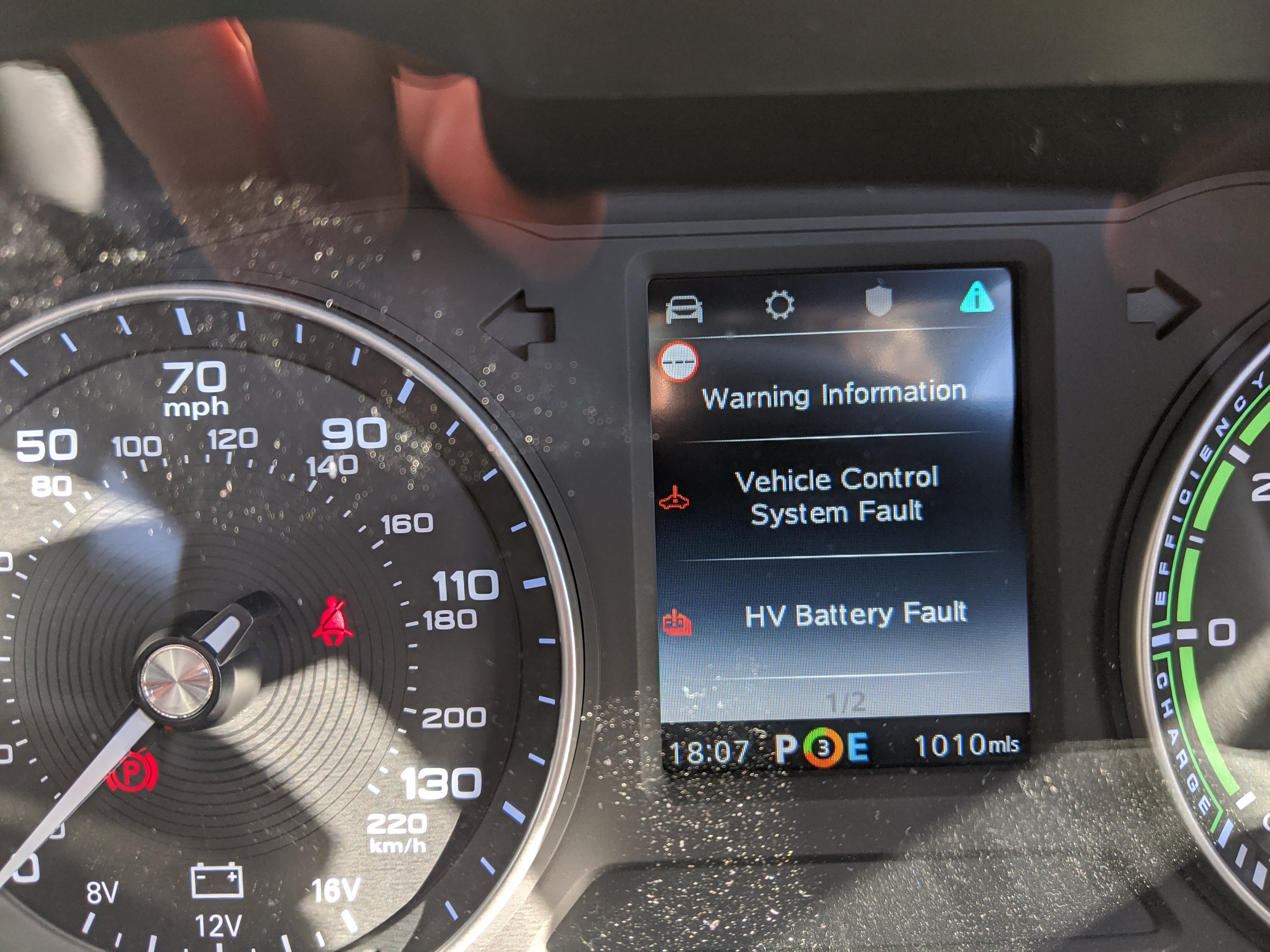 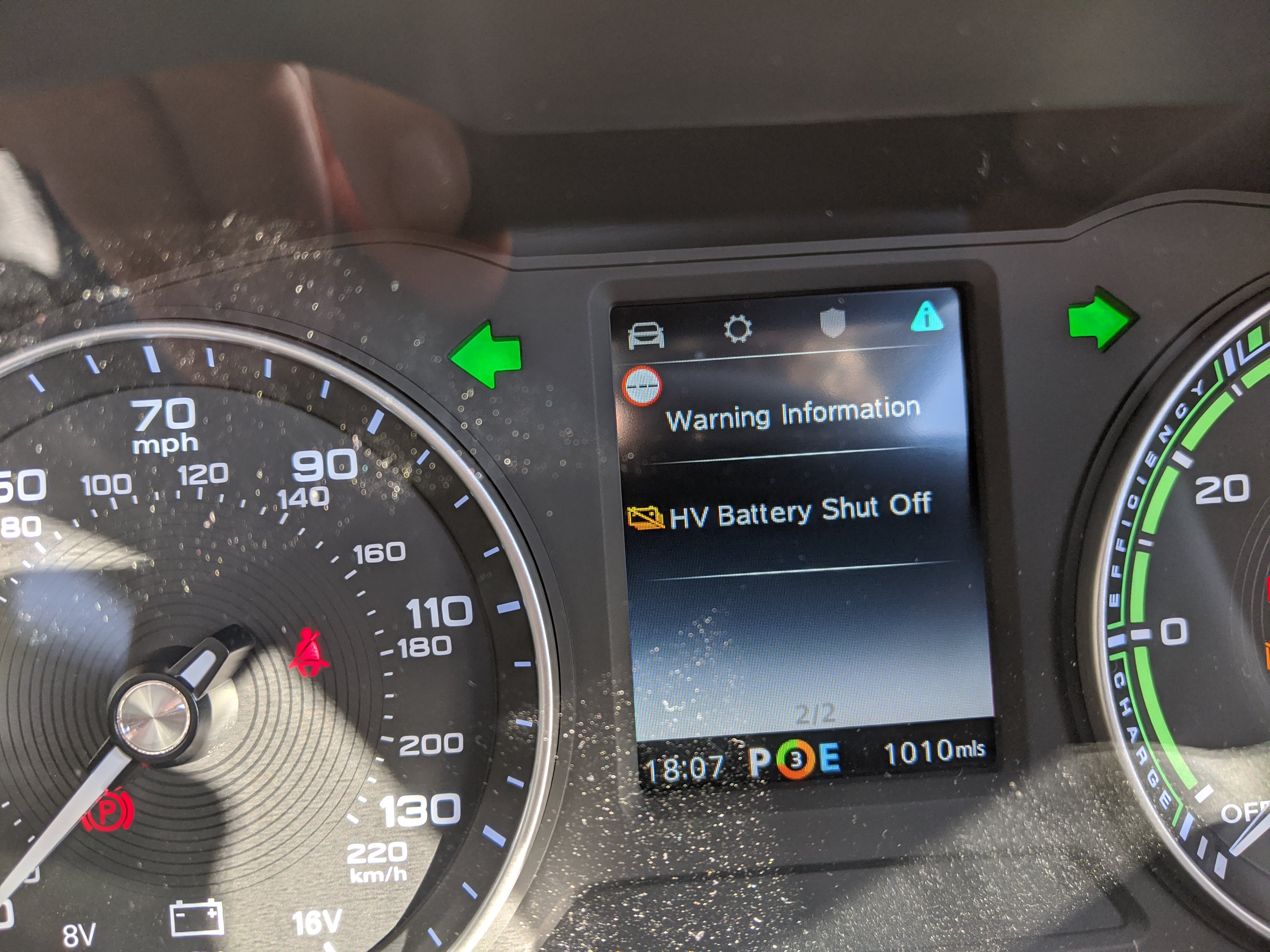 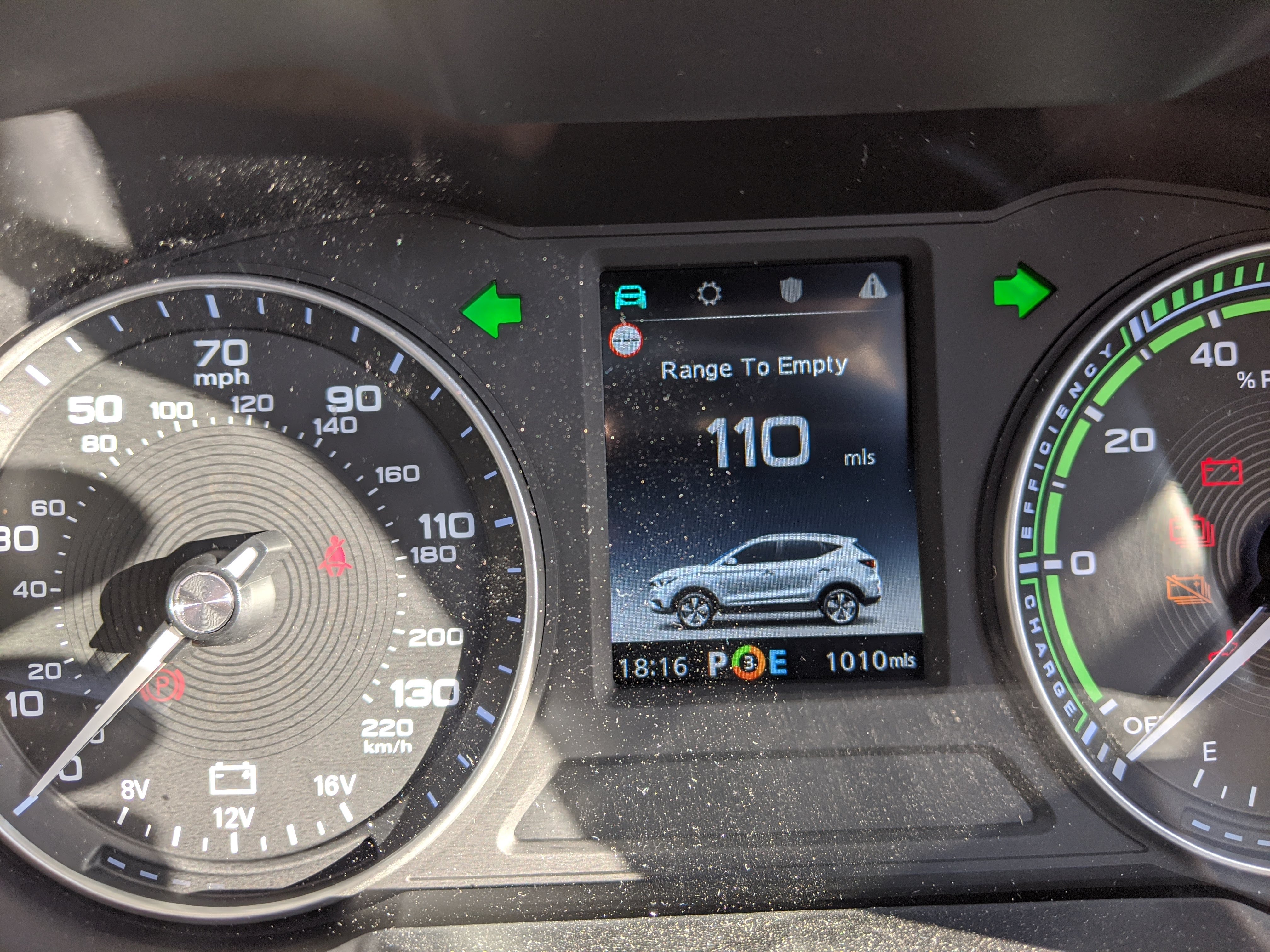 As you can see the 12V battery is 50%+ (so 12V+) range is over 50% (probably around 75% ), but still it's scary how the car stopped while running.
I could have had really high speed on a motorway somewhere, god knows what would have happened then.

The strange thing though, after getting these errors, the car wouldn't stop!!
Start/Stop button wasn't working anymore, so the car wouldn't close with the key.
Got rescued back home where the stop button worked, but when I tried to start the car, it didn't want to switch to Ready state anymore, and keeps signalling the errors.
Last edited: May 13, 2020

I can’t help with this one I’m afraid sorry, I would suggest it’s back to the MG work shop..
K

@ iclau86
Your situation is rather strange. It will be interesting to see what the dealership says.
However, it seems there may be something also draining your 12 volt battery excessively. You should get that checked as well.
My understanding is that each charging session charges the 12 volt battery as well as the HV Battery. Hence regular top-up charging to keep HVB between 10-20% to 80-90% will ensure that the 12VB is always adequately charged to initiate start up. Once ignition is initiated all systems operate from the HVB and not the 12VB
Your 12VB is about 25% which is low but this would not be the cause of HVB and car shutdown as you were already in ignition mode and you HVB is showing adequate charge with range up to 110.
Is it possible that you may have incidentally touched the ignition switch while driving?
My EV Biffins tell me EV circuits should be such that touching the ignition button while at speed "should" not result in HVB shutdown but doing same when braking or at standstill may result in HVB shutdown. ? They think same applies to accidentally pressing the park button and in their opinion what you discribed may be one of the above situations. I am not sure but to them this is not a systemic issue in all ZS EVs such as the failure of delayed charging. They think this is an individual issue.
Please update on what the dealership says when you have it sorted.

You are correct and it was proved that the 12 battery is charged whilst the HVB is being charged. Videos do verify this on YouTube where ZS EV owners have tested it to confirm.
F

If you have a home charger ALWAYS plug it in EVERY night and you should in theory never have a low 12v battery and the probable problems that come with that. Let the BMS deal with the health of the HV battery, after all that's it's function amongst other things. If you worry about overcharging the HV battery don,t as ALL EVs report a 100% charge when in actual fact it is not. I like the fact that EVERY morning I have a full tank so to speak ready to go if needed regardless of the lockdown.

I honestly can't understand all the faffing around worrying about how you charge the HV Battery, let the BMS do it's job and if there is a problem you have an 7 year warranty to deal with that.

I think Frank might have a point here. I’ve seen an explanation on YouTube regarding HV batteries explaining that quoted capacity is actually smaller than actual capacity by around 10%. This allows the HV battery to never be fully charged and never fully empty. For over a year I fully slow-charged my PHEV every night without issue.
K

@Mgkev, @ Frank, @ Mark H, and Folks,
The HVB charging regimes recommended is just as you say daily slow top up charging overnight with low rate charging where possible. Rapid DC charging occasionally on long journeys.
If one keeps charging in this manner then once in a while a message will appear "Equalising Charge Required" or something similar. When this happens you have to slow charge up to 100% and leave plugged in for further 2 hours for equalising to occur. Please see your user manuals for the info on this.
Until such a message appears the plug in overnight every day or every other day approach is the best. Hustle free.
Last edited: May 14, 2020
K

@ Dave, @iclau86
How are your ZS EVs coming on.
Is there any update on the situation with your HVB mulfunction and failed rapid charging?
@ Dave my EV Boffins have been looking carefully at what happened with you car. In their opinion it is possible that your experience was one of a "safety cut out".
As you know when there is dirty or water on the charging plugs, it can cause currents to surge in the on- board-charger and induce a cut out. It is likely that is what happend with you.
Please update with what the dealership says. For now my Boffins will keep looking and advise if they find anything useful.
Folks to prevent this situation from occurring we have to remember to keep the charging plug dry and dirty free at all times.
@iclau86, is there any news from your end?
Last edited: May 14, 2020
Share:
Facebook Twitter Reddit Pinterest Tumblr WhatsApp Email Share Link

Get your MG ZS EV Merchandise 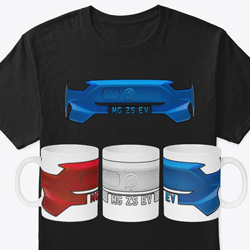